After all the grand plans and the complex operations, after the big dreams and small realities, after spending the entire budget on black and white photocopies of the room sheet,  Clandulla State Gallery has finally managed to open its doors with The Survey Show.  It was a beautiful day and a beautiful crowd.  Everyone was famous and highly esteemed.  Thank you to all the artists, to all the art world glitterati, and everyone that showed up to wander the path that is the Clandulla State Gallery.  Here are some photos to help you remember what it felt like:

Back-blp, 2014, is an artwork that will be worn by gallery goers.  It is composed of blps that visitors are encouraged to wear around the Gallery space. Back-blp is a mixture of  Richard Artschwager’s blps and Daniel Buren’s Sandwich Men, both works that originated in the late 1960s (though Artschwager continued to make and locate blps randomly around the place), which were intended to draw attention to physical space which is conventionally devalued in modern art and culture alike. 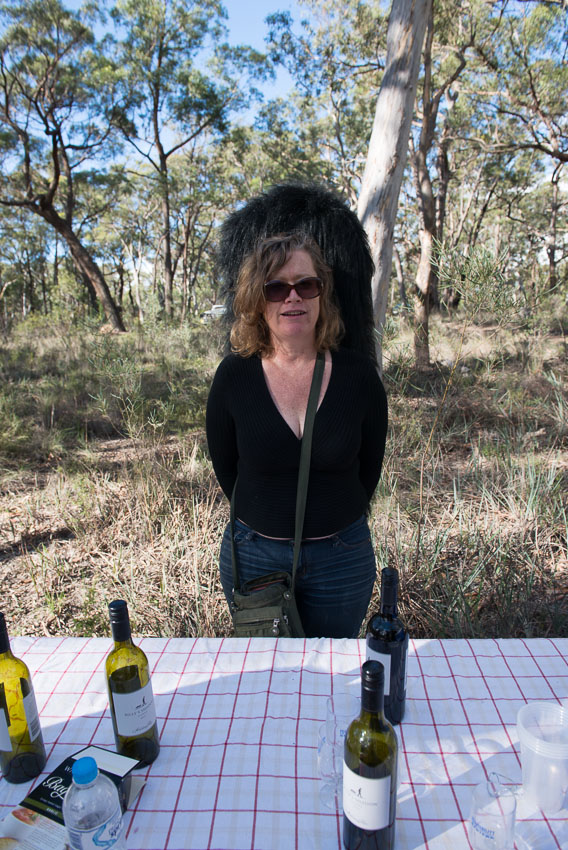 Chandelier for Ants is an offering to the smaller creatures of the forest.  Dripping with toffee, the chandelier has been made with sugar and a found branch that will disappear back into the forest. 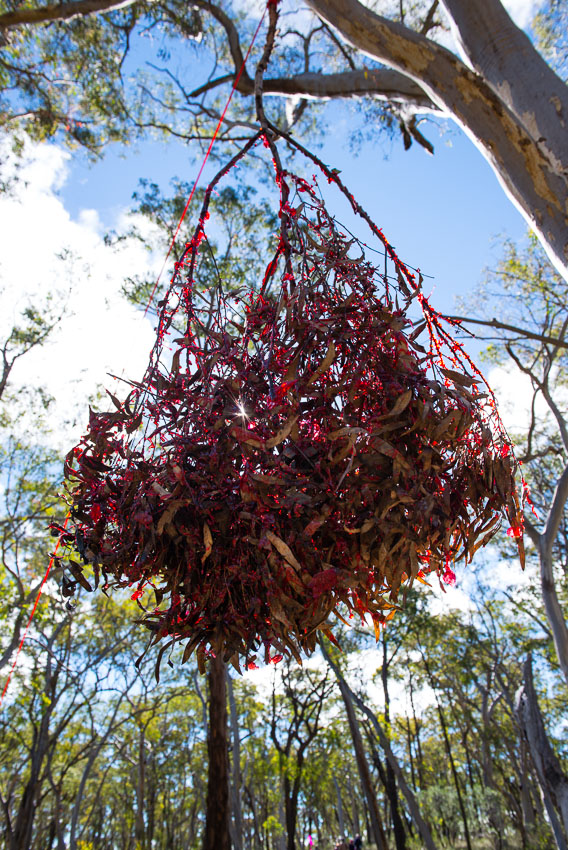 The Seeder Glitch replicates the natural process whereby a weed ‘throws’ it’s seeds to propagate. When weeds are sprayed with chemicals designed to eradicate them, often they are coloured pink by the dye in the spray in order to track their obliteration. Some weeds are harder to kill than others, some weeds are Round-Up resistant and some weeds simply mutate.

When I work with the ideas of mortality and the grotesque I am reminded of my own impermanence, fear of death and existence. My life as an extravagant formed ornament that maybe beautiful or misshapen, awareness of connecting with ones self and the world through still life with paintings and the three dimensional installation.  My art is like reading a visual book, which I call The Wattle Room and then consecutive chapters unfold with each exhibition. It’s a visual memoir.  When people see this work, I’d like them to see the use of natural and artificial elements in my installation, which equate to nature and civilization, a consumer society, which is trying to maintain an appearance when things are going rapidly wrong. Acting as though nothing is wrong, addicted to immediacy and misshapen values. Ignoring a looming disaster at the endless party. 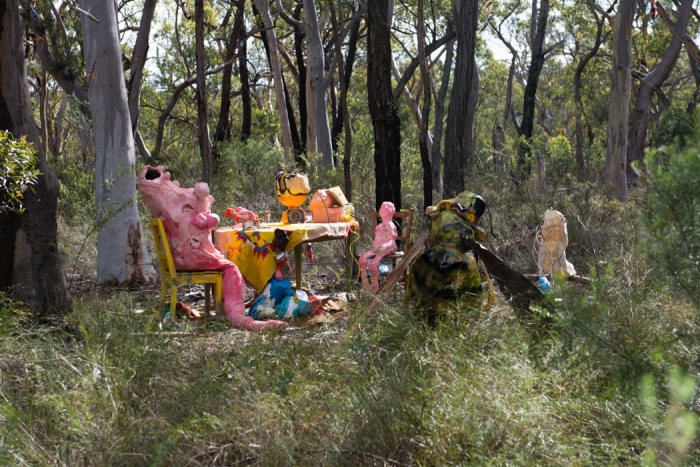 What are our expectations of a gallery space? Walls with pictures on them, at the very least. Just as the Clandulla State Gallery inverts the idea of what constitutes a gallery, I too am inverting the idea of a gallery wall as a non-participating “solid” element in the gallery space. This translucent wall becomes a flickering, fragile frame for a living landscape, seen both through and around its edges.

‘artist, scientist, tourist.’ At the site of the Clandulla State Gallery, Kelly Spritz collected several samples from the site. These include rocks, wombat scat and a small tree branch which have been incorporated into a working project. The project is a response to the area as well as to the the idea of what it is to experience nature. How we experience holidays and nature trails is of interest to Kelly as she is aware of the borders of the built and natural world and our desire to connect with nature on some level. The connection can be via artificial or real representations and this is reflected in the work at the Bush Gallery.

Outpost, 4 red cloth tarps, 6 white bedsheets, rope, 2 folding camp stools, 2 white enamel basins, flour, performer. It responds to the forest environment as territory, terrain, as colonised land. Also as something perhaps slightly unwholesome.  A feeling I have experienced in State Forests that is different to natural bushland.  I am dealing with ideas about habitat, camouflage, refuge, and isolation and thinking of landing in a strange other world, an uninviting place. I am also thinking about an enclosure, a tent or tabernacle, which may be a place of worship, or a way of concealing activities. Where did it come from and how did it get here? How long has it been here?  These are the kinds of questions that require a suspension of disbelief. To this I will add the occupant, a durational performance perhaps maintaining this place and its status. Perhaps waiting for a war to end that has in fact already ended decades ago, or anticipating one that is perpetually imminent. 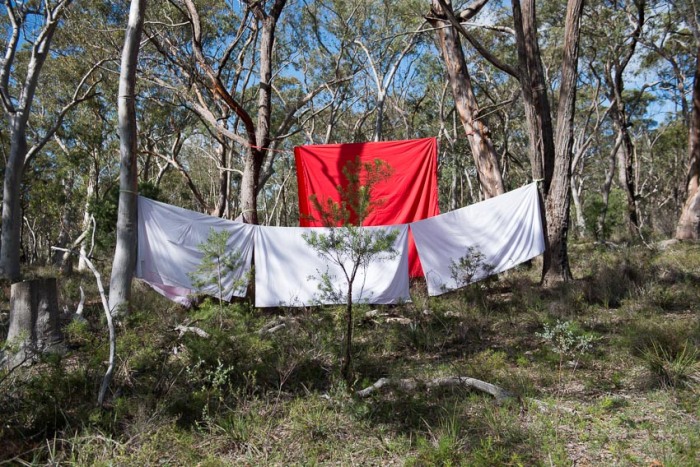 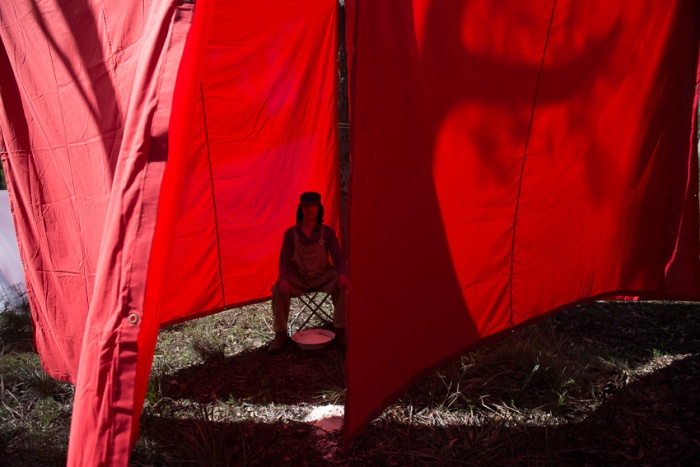 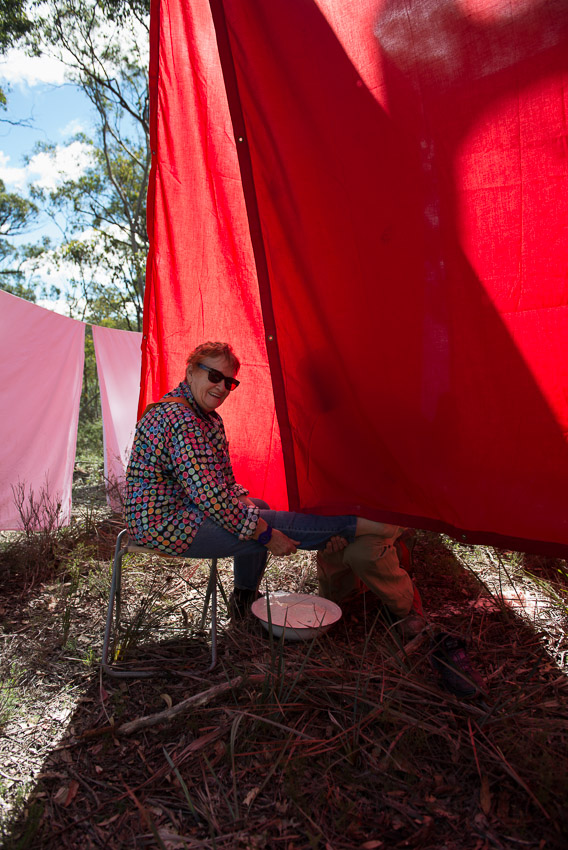 For the Survey Show my objects will be trees. I see the show as an opportunity to get away from the mess of art objects accumulated in boxes, and to reclaim a sense of space that has been lacking lately.  I want to travel lightly, so I will be bringing text, pins, labels, a glass dome, and maybe, if I can’t help myself, an object or two. 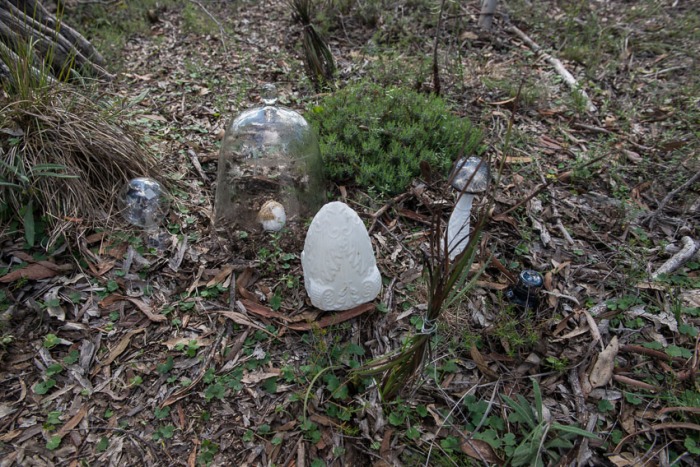 Raft No.2 (2014), White sand, cable ties, Dimensions: Variable.  Zegan has been thinking on and off about Théodore Géricault’s painting, ‘The Raft of The Medusa’ (1819) for approximately ten years. The French frigate, The Medusa, sank on route to Senegal in 1816.  Géricault’s painting is widely agreed upon by art historians as marking the birth of modernity. ‘The Raft of The Medusa’ was the first painting in the European tradition to depict and place equal importance upon the representation of slaves, people of colour and Caucasians. Historians have documented that the raft helped save the lives of some ten people, from the original 150 passengers of the raft. It is well documented that the official life rafts had unassigned seats that could have easily accommodated additional passengers. 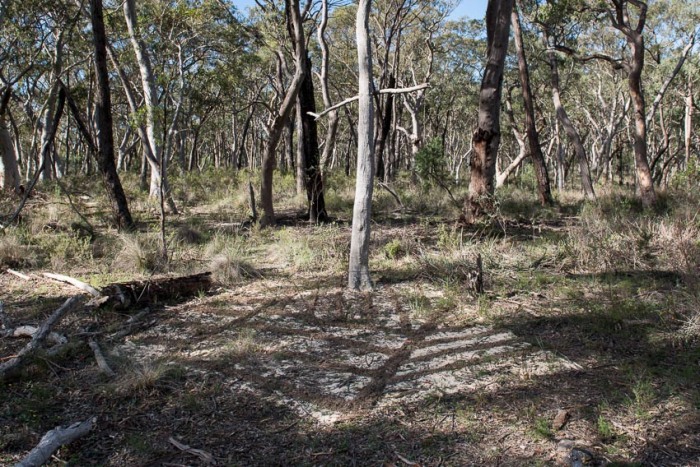 ­Imprint, 2014 An anonymous patch of bushland like The Clandulla State Forest has its own human history.  The scars are still there, the residues of human lives, the stories of people who have passed through this land, remain.  This work evokes a story that we do not know beyond the contents of someone’s home, unceremoniously dumped like a murder scene in the middle of the forest.  The objects belonged mostly to a man and a girl whom we can assume was his daughter.  This material, though no longer physically there, remains dormant in memory.  Whenever I enter the forest, it returns to the afterlife, whispering to me a story I can never quite hear. 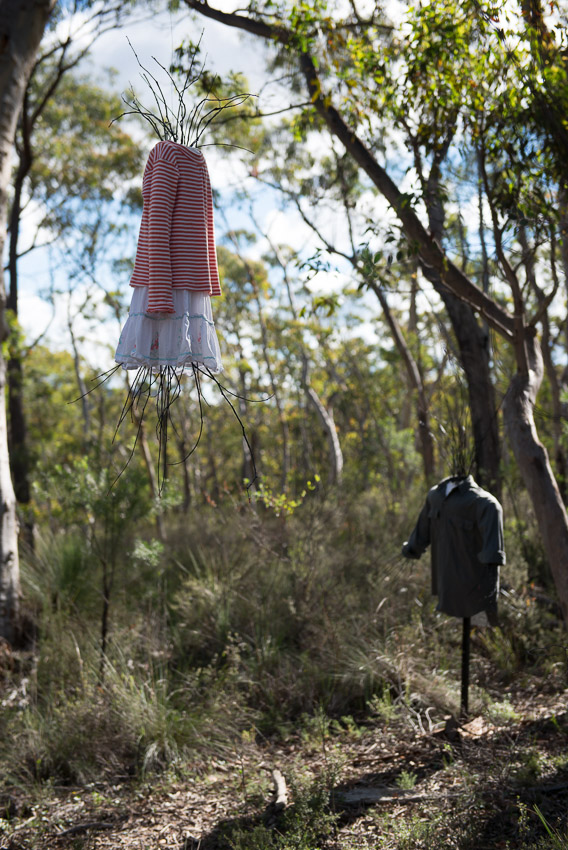 Balance 2014.  People are used to talking about ‘the balance of nature’ and ‘not upsetting the balance’, but the natural world can also be seen as a series of catastrophes and recoveries. 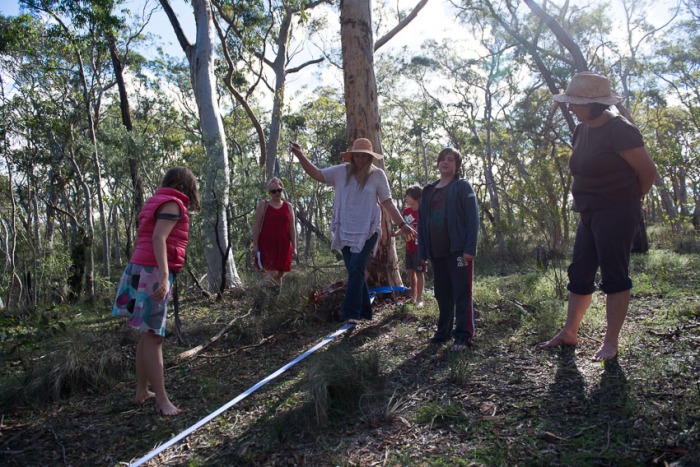 Here and Now, 2014 Pair of lounge chairs and frames hung on trees.  The work invites the viewer to sit in a comfy chair and stare at a framed part of the forest. Rather than see the frame as a portal to another world, it is tested as an amplification tool of the place that one is in. This is an extension of Breen Lovett’s moving image work, which apart from its architectural line of inquiry, aims to re-present the present.

and here are some of the peoples: 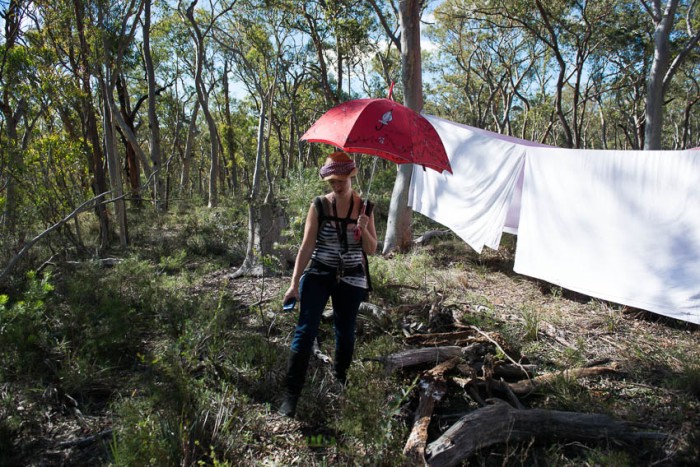